RDF is s fuel source obtained from recycling plants; we have been involved in such a waste recycling plant in the UK - South London. The fuel is highly inflammable and if prepared properly burns to fine grey ash which is mixed with cement. The plant receives many different types of waste, this is then processed, please see the graph below.

The south London plant occupied a site of 7.5 acres or 18.53 hectares. The processing plant occupied an additional 6.176 hectares of the site, the remainder being a large office block and various buildings in a state of disrepair.

The project was to review what could be done with the site and to increase the performance of the business.

The recycling centre was taking in less than 30,000 tonnes of household waste per year when the capacity was 200,000 tonnes per year, a lot of room for improvement. The challenge was the quality of waste, strategic changes had to be made. The business also included a road haulage and demolition company and an Asbestos removal company, all feeding the recycling plant. Below is the 2017 analysis. 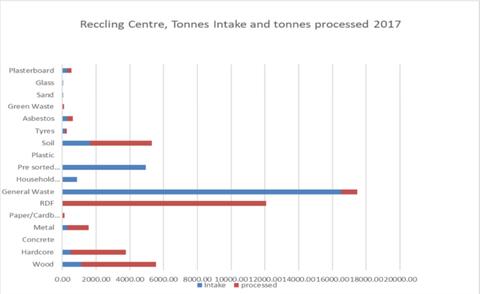 Total Intake in Tonnes 26,844.53 Total Sales in Tonnes 25.186.02 Tonnes to Landfill 1,486.86 Shrinkage 171.65 Total 26,844.53 The most important product was RDF, RDF production costs are minimal as the production is automatic. Whilst the business was intrinsically profitable, however, the environmental (RDF) was causing the losses.

The distribution was costing £350 per tonne, with revenue of £250 per tonne. The business was instructing brokers who were selling into the EU where there was and still is a high demand for RDF for producing electricity and home heating. The solution to this was to obtain contracts with local Cement producers.

High-quality RDF has a high calorific value which burns to fine grey ash when burning lime for Cement production and is mixed with the cement so there is no waste. The selling price was much lower and the cement manufacturers collected the RDF, eliminating the delivery costs. Resulting in profits, previously making the RDF losses, asbestos processing is a highly complex task and producing losses.

There are severe rules and regulations on the removal and disposal of asbestos. The business was sending the asbestos to land fil in specialised wrappings, which were Government inspected before being buried. The cost of landfill for Asbestos was approaching £1000 per tonne and increasing. Asbestos starts out as a rock that is crushed to fine dust and then processed into sheets.

The asbestos fibre has two hooks which make it very dangerous, the body counteracts this by wrapping tissues around the fibre which eventually causes asbestosis in the lungs, there is no known treatment. Asbestos is a natural rock, and the asbestos sheets can be returned to their natural state by heating to about 1,500 degrees C, with the liquid being poured into moulds to produce garden features or just returned to the desserts and the sea.

There was a company in the west midlands of the UK that specialised in reconverting asbestos to its natural state to produce garden furniture and objects. The deal with them was to transport the asbestos to them for a nominal cost. This substantially reduced the costs and increased the EBITDA, by eliminating landfill costs. The strength of these actions, the owner was able to dispose of the Recycling centre for £26 million and the surplus land for £7.5 million. 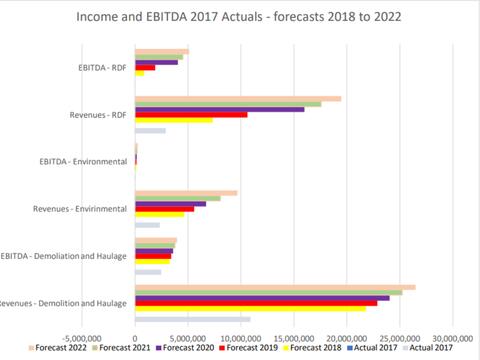 The owner was a classic car enthusiast, owning 2 Gullwing Mercedes, 16 Ferraris, and other marques. This enabled him to follow his passion. He was very passionate about becoming a classic car dealer.